Report Writing is an important discipline for a wide variety of roles and the range of documents that arguably fall under that category is vast. Here are some tips on using active voice in your reports to make them more engaging.

Find us on Social Media
Follow us on social media for news and new post alerts
Get Our Newsletter
Subscribe to our newsletter and get posts to your inbox
Click here to subscribe
Attend a Course
Don't just read it! Learn it on one of our many courses
Click to see our courses

Is something going on?

This is great news of course. As our enquiries increase in response to the gradual relaxing of lockdown measures, all signs of recovery are warmly welcomed. Like many sectors, training has been hit hard by the global pandemic and increasing enquiries for both online and face to face training present the clearest signs for hope of a successful future.

What has got me curious however is the particular upturn in requests for Report Writing.

In the current Coronavironment (does that work?) it would be easy to speculate about the need for more reporting; leaders asking for business impact assessments, reports on changing demand, supply and productivity, proposals to pivot operations or shift business models as well as the need for (I say with typical scepticism) more diligently recorded investigation and audit reports.

I am curious but unlikely to report on this without your help. I am keen to know your thoughts on this dear reader. Pop them in the comments – I am very likely to be very grateful.

Anyway, this question has prompted the topic for this blog.

Report Writing is an important discipline for a wide variety of roles and the range of documents that arguably fall under that category is vast.

What is the Key to Good Report Writing?

There are many aspects that combine to create a high-quality report. These range from format and structure, through style, grammar and punctuation, writing for your audience and understanding your objectives to the visual appeal and even, in the case of annual reports that aim to stand out from the crowd, the degree of interactivity that can be achieved (Sonae’s 2012 annual report allowed its readers to turn a cog on the side of the document that controlled a whole series of cogs that adorned the front cover).

Accuracy of content with attention to detail might stand out as the natural forerunner in priority but there is a feature that underpins the content that I would argue is the real key to great report writing. This is the feature that predominantly aids comprehension. After all, what good is great content if your reader struggles to understand it?

This feature is the grammatical structure known as Active Voice.

Active Voice denotes the order of three components in a sentence. Most sentences contain at least two of these components and in either case, it is the order that they appear that determines whether the sentence is active or passive.

The Components of a Report

The three components are:

It is the verb that is the lynchpin. This is the ‘doing’ word of a sentence and is critical in a business context given the overwhelming presence of activity and transaction.

The subject is the subject of the verb – who or what did the action (the verb)?

The object is the object of the verb – to what or who was the action done?

So, the order of these components is what determines whether the writer is using the Active Voice or the Passive Voice structure.

Using the Active Voice in Reports

The clue is in the name really. Active voice is more ‘active’ in the sense that it is more immediate, more concise, sharper and more definitive. It moves the reader on in a way that creates clarity through simplicity. These are qualities that address the main purpose of most reports – namely to clearly communicate what actions people have taken and/or what actions people will, could or should take.

Take a very simple example and you can immediately notice the difference in clarity and simplicity that come with the active voice compared with its passive alternative.

‘The mat was sat on by the cat’ is passive and sounds clunky. It also attracts our attention to the mat rather than the cat making the object more important when this is often not the case. Also, notice the extra word count that comes with using passive voice – not something to be encouraged in business writing in general.

In the next example you can see that, without breaking information down into easy to absorb chunks (sentences), it is easy to get drawn into a passive style that becomes quite complex or, at least, more challenging than it needs to be.

‘Phase one of the project included the collection of a range of data and research material completed during 2019, which was utilised in the creation of a range of, soon to be finalised, analyst ‘personae’, and input into the planning of a new enhanced information architecture for the business’s online channel, particularly resources for current analysts.’

The active structure, by contrast, lends itself to simpler and shorter sentence structure and thus helps to give an account that is easy to follow in a step by step fashion.

‘In 2019, the team undertook phase one of the project. They collected a range of data and research material. They used this material to create analyst ‘personae’. The team also began to plan an enhanced information architecture for the business’s online channel. Current analysts can already use some of the resources the team have created.’

Repetition of the subject in each sentence makes the writing easy to follow.

Repetition of the subject (subject) makes (verb) the writing (object) easy to follow.

You do not need to write a report to practice your grammar ready for reports. Next time you write just look out for the active and passive choices you make and if there is a lot of passive voice consider the alternative. Grammar check on Word will (among the other 97 options) conveniently highlight passive voice for you if you have it turned on.

It is important to point out a couple of exceptions with active voice where passive voice is the preferred option.

In the second case, removing the subject of the sentence helps the objective research to remain as objective as possible. Obviously, a researcher is involved but they often prefer to remove themselves from the data/report to provide an extra sense of objectivity. For example, “Atlas ti Software was used for data analysis” instead of “I used Atlas ti Software for the data analysis”.

Report writing in its purest sense ‘reports on events’. Think of a News Reporter heading to a scene and interviewing witnesses etc.

Their account typically involves setting the scene – who is there and where they are. They then detail the main actions, usually in chronological order, to produce a newsworthy story. A newspaper report might read for example, ‘Bob Green (subject), a local resident, said (verb) he saw two youths (object) walking away from the scene’. Or ‘Beverly Smith (subject) called (verb) the police (object) after she (subject) found (verb) a note (object) pinned to the door of the gym’

The Subject–Verb–Object structure is the key to good report writing then, but it is far from the only grammatical tool we should employ. Present-tense participles and nominalisations are two other verb-based devices to which a report writer should be alert – in this case, so you avoid both. Add to this, the softening of genteelism, substituting clunky phrases with more concise language and deleting altogether the unnecessary words that find their way onto the page and we have a collection of tools that help bring a polished and professional touch to any report.

Format and structure can only go so far as to make a report clear and understandable. It is the grammatical structure of the sentences that makes the content within the report easier to absorb – especially with lengthier pieces of work – and it is here where the real value lies. Format and structure undoubtedly help significantly but neither will rescue poorly worded content that is difficult to engage with. 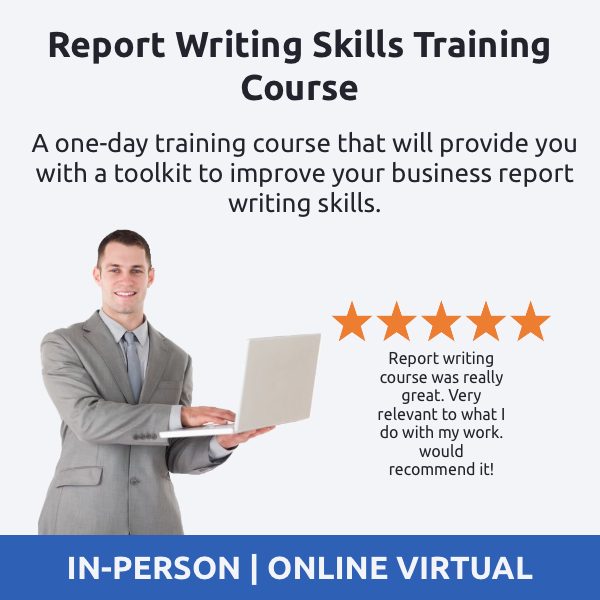 Come and connect with us on your favourite social media site. You'll find us on those below: