In this article
You are here:
Estimated reading time: 5 min

De Bono's 6 Thinking Hats is a tool that is used in problem-solving and decision making to look at a problem or issue from various angles and perspectives.

It can be used as a tool by individuals or by teams and groups. It's also an effective tool to use in meetings when facilitating discussions about problems or issues and making decisions on what actions to take.

The 6 Thinking Hats was developed by Edward De Bono who wrote the best selling book Six Thinking Hats in which this tool is described.

The idea behind the 6 Thinking Hats is to create a mindset change that forces us to look at a problem or decisions from different angles. Each hat has its own descriptions and, when 'wearing' that hat, we adopt that mindset and look at the problem or the decision through it.

The 6 Thinking Hats represent different perspectives. Each hat has a different colour to make them easier to remember and also to provide a simple, common language that everyone understands when using the tool.

The 6 Thinking Hats are:

In the next sections, we'll look at what each hat represents, what it does and when we should use it.

The first of the 6 Thinking Hats is the blue hat. This hat represents process and is often known as the Process Control Hat. It's used to manage the thinking process and ensures rules and guidelines are followed.

When wearing the blue has, you or the team consider the process that you will follow to identify the problem, make your decisions and carry out actions. It's used to manage the agenda of the meeting and also consider any processes that your decisions will impact on.

It's a good place to come back to when you need to remind yourself or the team of what you are there to do and how you intend to get there.

The blue hat is often used by the chair of the meeting or the person leading the discussion, but it can be used by anyone when needed.

The second of the 6 Thinking Hats is the black hat. The black hat represents caution (known as cautious). It's used when caution is needed and to investigate risks or the impact of our decisions.

Often overused and sometimes seen as a negative mindset (which it really isn't), the black hat has us consider the risks, weak points or downsides of any solutions or ideas that we come up with. Once identified, the black hat can then be sued to consider what could be done to address these areas.

The back hat can be quite powerful, but if overused, you will find yourself in problem stating mode for long periods of time and never really get to problem-solving mode.

A good idea is to agree on when the black hat will be used and for how long and then use the blue hat to manage this.

The third of the 6 Thinking Hats is the white hat. The white hat represents facts. It's used to establish factual information by asking questions about the details that are currently available and details and information that isn't.

For example, you could use questions such as:

Using open questions to draw out information is key to the white hat and, it can be used alongside the other hats easily to dig deeper into information to push more successfully towards the outcomes you are looking for.

You can find out more about asking open questions by reading our article Different Types of Questions.

The fourth of the 6 Thinking Hats is the green Hat. The green hat represents creativity. It's used to generate ideas, approaches and solutions.

The green hat allows us to share our ideas, no matter how unfeasible, ridiculous or 'out there'. When wearing the green hat, any idea is acceptable. Think of the green hat as permission to brainstorm without boundaries.

Similar to the white hat, you could use questions to draw out some ideas such as:

It can be fun wearing the green hat; however, there does need to be a stage where this is replaced with one of the other hats to move the process along. It's nice to dream, but there needs to be a time for action.

The fifth of the 6 Thinking Hats is the yellow hat. The yellow hat represents benefits. It is used to investigate the benefits of ideas, generate optimism but also consider these in a logical way.

Mixing the black and yellow hats can be useful to make sure things are looked at from both angles. The yellow hat can also be good to use when negativity creeps into meetings or discussions about problems and issues.

The last of the 6 Thinking Hats is the red hat. The red hat represents feelings. It is used to allow you or the group to express how they feel about something - for example, an idea or solution.

The idea is that when wearing the red hed, people can speak openly. They don't need to offer any reasoning (although it is useful if they do) but just share their thoughts. The rationale can be investigated later using one of the other hats.

The red hat is also useful to encourage the group to think about the feelings of others. For example, when considering ideas, how will the idea impact other people such as colleagues or clients.

Feelings when using the red hat can be both positive and negative - this is an important point and we should ensure a balanced view in all scenarios, otherwise, we get back to problem stating and not problem-solving.

If you are considering using the 6 Thinking Hats, make sure that everyone understands the principle before beginning your meeting or discussion.

Agree as a group that the principle will be followed, then use the language throughout the discussion - for example. "lets but on the black hat and think about the risks here'.

Start your conversation with the blue hat to lay out the meeting agenda and the outcomes you are looking for.

Then, you could switch to the red hat to ask how people feel about the situation or issue as it is.

Someone should then take the role of wearing the blue hat (for example, the chairperson) to keep the meeting and discussion on track.

If the group is wearing one hat, but a member demonstrates behaviour from another, this should be brought out and stated that we are not wearing that hat now. The group can then agree to change or come back to that point later in the discussion.

You could also consider having different people wear different hats all the way through the meeting - and that is the role that they will play.

Once the meeting is complete, agree on actions and allocate tasks that have come out of your discussions.

You can learn more about the 6 Thinking Hats and other problem-solving and decision making tools by attending a problem-solving skills training course. Take a look at our Critical Thinking and Problem-Solving Training Course for more details.

®? The 6 Thinking Hats is a registered trademark of deBono.com.

Was this article helpful?
Like 0 Dislike 0
Views: 14
Facebook0Tweet0Pin0LinkedIn0
You are free to use the content published in the Revolution Learning and Development Articles Hub providing copyright is acknowledged and a reference and link is included to where you found the content. Content may not be republished or sold at any value without express written permission from Revolution Learning and Development Ltd.
In this article 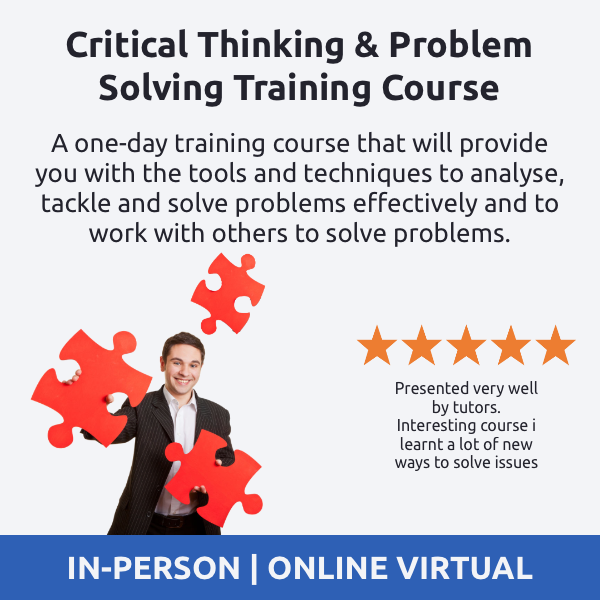