How to Delegate Effectively

In this article
You are here:
Estimated reading time: 5 min

There are many reasons why a leader or manager should delegate. There are plenty of reasons (or excuses) given as to why they don't. In this article, we will explore what effective delegation is, what causes delegation to fail and how to delegate effectively to ensure delegation works.

Delegation describes the process of one person passing the responsibility and ownership of a task or series of tasks to someone else. This means the person who is handed the task will now be responsible for its completion.

When we delegate, we can delegate a task in its entirety or a small proportion of a larger task. Delegation tends to happen in project management, but also is equally as important in the day-to-day activities of a leader or manager. It is seen as an important skill in time management.

When we delegate effectively, we are very much using the stewardship delegation approach.

Why We Don't Delegate

Here are some common reasons that people give as to why they don't delegate:

All of the above a solid beliefs that can be changed. As we mentioned earlier, these tend to come from having a bad experience of delegating in the past.

Why Does Delegation Fail?

There are many reasons why delegation fails. Here are some examples:

In reality, it usually means that the person delegating did not delegate effectively.

How to Delegate Effectively

Effective delegation is a process. It requires a step-by-step approach to get it right. If we are to delegate effectively, we need to ensure that all steps in the process are followed. 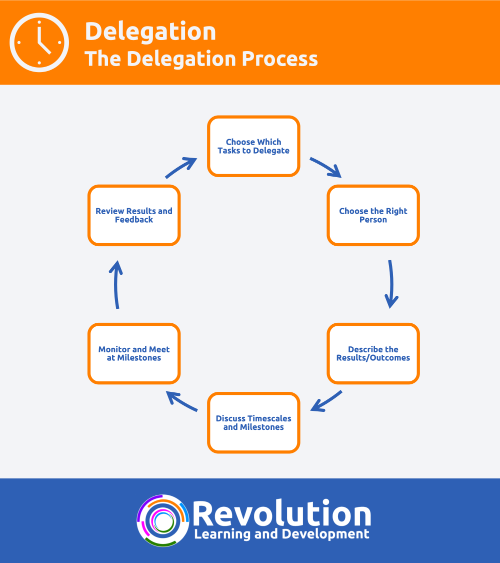 What Tasks Should I Delegate?

One of the biggest mistakes that people make with delegation is not picking the right tasks to delegate. It's a fundamental part of effective delegation. The belief is that we can delegate anything and, while that is true, thinking this way can lead to delegation failure.

When we delegate effectively, we are looking for the biggest return for the time that we spend delegating the tasks. This is the case when we need to spend time training/showing, someone, how to do the tasks we are handing over.

In his work, Stephen Covey describes this process by looking at a set of scales and where we place the equilibrium. This shows that we should focus on delegating repeatable tasks and not one-off tasks. 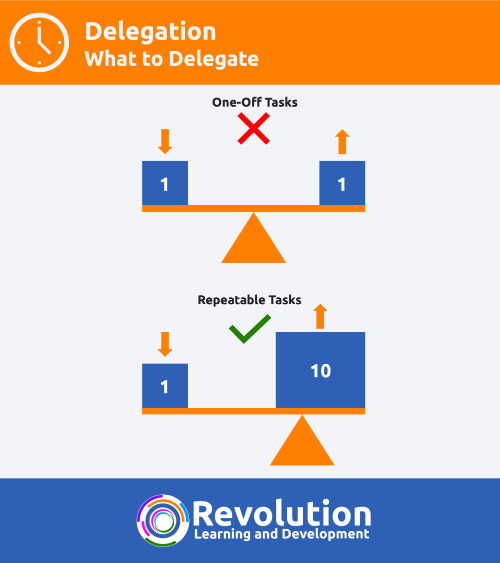 As you can see in the image above, if we delegate one-off tasks, we input one unit of effort to hand over the tasks, the task gets completed and handed back to us. Because we spend the same amount of time showing someone how to do the task as the task takes to complete, we only get one unit back in return.

This is where the feeling of it's quicker to do it myself comes from.

Who Should I Delegate To?

We can't just delegate to anyone. Another common mistake in delegation is we pick people to delegate to who have spare capacity. This doesn't work. We need to pick the ideal person to carry out the task for us. This was we can be sure that we delegate effectively.

When it comes to picking the right person to delegate to, we should look at 2 things:

If we pick a person with high skill but low willingness, before we can delegate, we have to establish why there is a lack of willingness. We need to address this first before handing over the task otherwise, the delegation process will fail. You can address low willingness by using coaching.

If we pick a person with low skills but high willingness, we need to spend some time showing them or training them to do the task we are delegating. If we don't, again the delegation process will fail.

We should avoid a person with low skills and low willingness.

By picking the right person, we can be more confident that we delegate effectively and are more likely to get the right end result.

To learn more about delegation and how to delegate effectively, you could attend a delegation skills training course. Take a look at our Delegation Skills Training Course for more details.

Was this article helpful?
Like 0 Dislike 0
Views: 61
Facebook0Tweet0Pin0LinkedIn0
You are free to use the content published in the Revolution Learning and Development Articles Hub providing copyright is acknowledged and a reference and link is included to where you found the content. Content may not be republished or sold at any value without express written permission from Revolution Learning and Development Ltd.
In this article 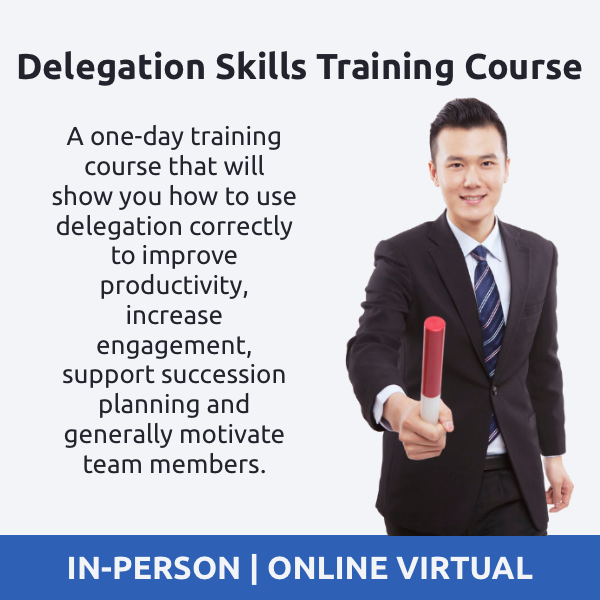